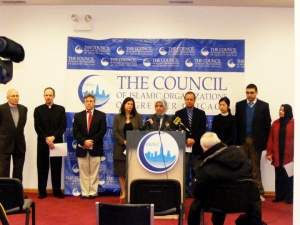 (CHICAGO- Jan. 19, 2011)– Community leaders today expressed their continued support for the proposed mosque in Willowbrook, Ill., which was recently rejected by the DuPage County Zoning Board of Appeals because of traffic congestion and flooding concerns and the potential to cause an “oversaturation of religious institutions” in the area.

The first two concerns were dealt with by experts on the traffic and flood matters at the zoning board hearing. As to the issue of “religious oversaturation” of the community, only a church and a Buddhist temple are located in the area, despite a sizable Muslim population.

The Wednesday news conference, orchestrated by the Council of Islamic Organizations of Greater Chicago (CIOGC), was to affirm the Fifth Amendment rights of DuPage County Muslims and call on the DuPage County Development Board to reconsider the zoning board decision.

“Our constitution guarantees us and all faith groups the right to worship and build houses of worship,” said Dr. Zaher Sahloul, CIOGC chairperson. “Unequal application of the law by the DuPage County Zoning Board makes it impossible for Muslims and other faiths to practice their religion freely in their country. This is un-American and it should change.”

“As a Jew I am especially troubled by the pattern across the Chicago metropolitan area–consistent with a pattern occurring across the country–to deny Muslim houses of worship and community centers,” said Ramsey. “My grandparents, as so many Jews from across the world, fled to the United States of America to escape religious persecution. As Jews we feel a strong connection to our Muslim brothers and sisters who are being denied full access to practice their faith. Standing with them is of a high priority for us at JCUA.”

Members of the Muslim Educational and Cultural Center of America, which proposed the mosque, were also at the news conference along with representatives from the  Illinois Coalition on Refugee Rights, CAIR-Chicago, the Islamic Center of the Western Suburbs, the Council of Religious Leaders of Metropolitan Chicago, the Greek Orthodox Archdiocese of America Metropolis of Chicago and the Northern Illinois Conference of the United Methodist Church.

More on this story:

This entry was posted on Wednesday, January 19th, 2011 at 6:10 pm and is filed under Jewish-Muslim Community Building Initiative, Jewish-Muslim Relations. You can follow any responses to this entry through the RSS 2.0 feed. You can leave a response, or trackback from your own site.