From “The Hunger Games” to a Hunger for Justice: Reflecting on Jewish Teen Empowerment

Scene from “The Hunger Games.”

I saw the movie “The Hunger Games” this spring. I knew nothing about the books or the movie and was caught totally off guard by the horrific premise.

If you aren’t familiar, it’s about a “game” in which teenagers fight each other to the death over the course of several days in a forest, while the rest of the world watches. Fun, right?

One of many intense scenes in the movie depicts a lottery to determine which young people will be forced to participate in the event; the suspense, obviously, is tremendous.

So when one of the high school students participating in JCUA’s Or Tzedek Advanced Activism session compared lotteries to get into high school with that scene in “The Hunger Games,” I was really struck. 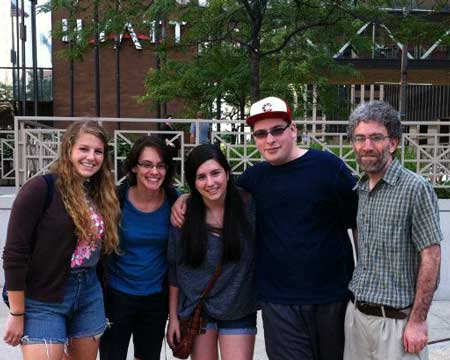 Emma Hultgren (from left), Leora Abelson, Madison Reisler, Dan Lapidus and Ross Hyman, organizer at Unite Here. They were protesting in front of the Hyatt Regency Chicago during Or Tzedek’s Advanced Activism session this summer.

It happened at an event called “Youth Power: A Story Slam.” That evening, young people from Or Tzedek, AVODAH, Immigrant Youth Justice League, UIC, CAIR-Chicago and other organizations gathered to tell stories, laugh and support one another. We heard stories about learning how to pray, getting into high school, putting one’s life on the line to fight for the world we want to live in, and being inspired by mentors, parents, and friends.

A couple of brave Or Tzedek participants told compelling stories, two of which were about the process of applying to Selective Enrollment High Schools in Chicago.

One Or Tzedeker mentioned the film, “Waiting for Superman,” which includes a scene about a high school entrance lottery. For him, the Selective Enrollment application process in Chicago felt hardly less arbitrary than a lottery. He compared the stakes to that scene in “The Hunger Games,” saying, essentially, that it feels like a life-or-death moment.

The Or Tzedek participants expressed a powerful understanding of the importance of education and the opportunities they are offered through their schools. Many of them attend excellent high schools, and again and again throughout the week, as they thought about the kinds of privilege they often experience, they identified education as one of their most significant privileges. They described improving education for all of Chicago’s students as a critical part of building the world in which we want to live, insisting that having an education that is well-resourced, safe, empowering and culturally sensitive and relevant should not be tied to racial, economic, citizenship or any other kind of privilege.

The comparison to “The Hunger Games” was so striking because it demonstrated how well the participants understood the urgent and material impact of the systemic issues they were learning about. This is an essential, but not always easy, step to make in developing an understanding of systemic oppression. I was not as young as the Or Tzedek participants when I began to learn about systemic poverty and injustice. Like them, it was the moments when I could relate to the issues I was learning about, when my own experiences resonated with the systems I was imagining, that it really hit home.

» A few spots are still open in the remaining Or Tzedek sessions July 15-22 and Aug. 5-12. Learn more and register here.

During our week together, the Or Tzedek participants consistently demonstrated that they are making connections between the more theoretical political analysis they are developing and the immediate and dire realities facing many Chicago communities.

They thoughtfully considered the context of racism and poverty exacerbating the violence young people experience in Englewood.

They critiqued high school community service activities that do not include work toward systemic change.

After my first summer session, I see that one of the profound strengths of the Or Tzedek program is that it gives participants the opportunity to develop relationships with the people and places that will drive their passion for social justice work, while simultaneously laying the foundation for a sophisticated and nuanced analysis.

This entry was posted on Thursday, July 5th, 2012 at 3:08 pm and is filed under Community Issues, Or Tzedek / Teen Program. You can follow any responses to this entry through the RSS 2.0 feed. Responses are currently closed, but you can trackback from your own site.