JCUA takes action in solidarity with the Muslim community in the face of hate speech and ignorance, and participates in media campaign to reclaim the meaning of the Islamic concept of “Jihad” from Muslim and anti-Muslim extremists alike.
——————

In late September, 2012 the anti-Muslim extremist Pamela Geller put up inflammatory ads in the New York City subway stations, which read: “In any war between the civilized man and the savage, support the civilized man. Support Israel. Defeat jihad” (see here). New York’s Metropolitan Transit Authority at first refused to put up such hateful signs, but was forced by a court order to oblige Geller.

Many in the New York Jewish community have responded strongly, including a counter-campaign by Rabbis for Human Rights – North America, who put up subway signs reading “Choose love.”

Here in Chicago, the Muslim community has decided that a significant point has been overlooked on both sides. At the heart of the problem is the blatant misuse of the word “Jihad” as if it were an acceptable synonym of say “terrorism.”

Indeed, many Americans remain confused about the meaning of the concept of Jihad in Islamic tradition. Led by the Chicago chapter of the Council on American Islamic Relations (CAIR-Chicago), the Muslim community has decided to reclaim the meaning of Jihad from Muslim and anti-Muslim extremists alike.

They launched the “My Jihad” media campaign, which utilizes Twitter, Facebook and other platforms to educate the American public about Jihad:

The campaign emphasizes that “Jihad is not savage, except in the minds of those who are too lazy or too careless to wish to understand a well-documented 1400 year old concept in both Islamic literature and Muslim life.” The campaign features photos of Muslims and non-Muslims with taglines about people’s various “jihads.”

Here is an example (more examples at the bottom):

As a show of interfaith solidarity, the campaign asked JCUA to participate. In response, JCUA’s Asaf Bar-Tura was photographed with CAIR-Chicago’s Gerlad Hankerson, with the tagline: “My Jihad is building bridges through friendship. What’s yours?”

When the photograph is available, we will share it. For now, here’s a video about the making of the campaign photos (and more photos below): 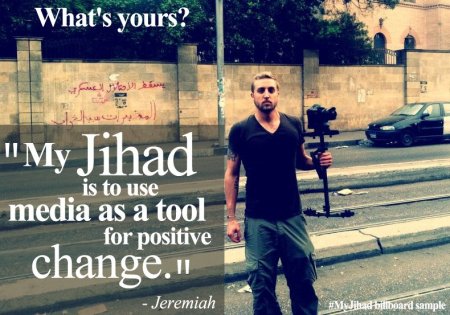 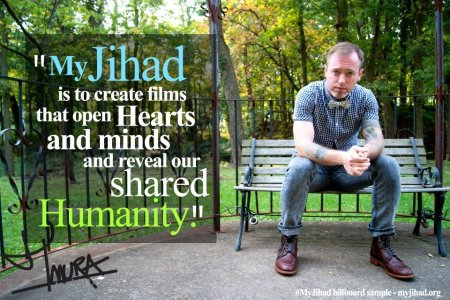 This entry was posted on Monday, October 22nd, 2012 at 2:31 pm and is filed under Anti-Semitism & Hate, JCUA Project and Campaign Endorsements, Jewish-Muslim Community Building Initiative, Jewish-Muslim Relations, Racism, Videos. You can follow any responses to this entry through the RSS 2.0 feed. Responses are currently closed, but you can trackback from your own site.