Join us in declaring: “Not in my Chicago!” JCUA is launching a social media campaign against the disgusting anti-Muslim ads that are appearing on CTA buses this morning.

The hateful anti-Muslim advertisements — with messages such as “Support Israel. Defeat Jihad” — are financed by the extremist Pamela Geller and her organization, American Freedom Defense Initiative. They have already been placed in transit facilities in New York City, Washington, D.C., Detroit, and other metropolitan areas despite legal challenges that such ads constitute demeaning and hateful speech.

“These ads are meant to create false divisions among our communities, generating suspicion and animosity,” says Judy Levey, executive director of the Chicago-based Jewish Council on Urban Affairs. “It is very important to say in a clear voice, ‘not in our city.’ We’re better than that.”

At a JCUA meeting Tuesday evening, dozens of Chicago-area residents protested the upcoming hate campaign by taking part in a social media-based action. They had photos taken of themselves holding signs denouncing Geller’s message and promoting a message of peace. Messages on the signs include “Islamophobia: Not In My Chicago” and “Islamophobia Offends My Jewish Values.” These images will be disseminated online today on the Not In My Chicago Tumblr and JCUA’s Facebook Page.

Islamophobic ad on back of CTA bus

Geller claims the CTA agreed to run the ads only after her organization threatened legal action against the transit agency, according to a recent post on Geller’s blog. The ads say, “In any war between the civilized man and the savage, support the civilized man. Support Israel. Defeat jihad.”

JCUA has confirmed that the ads will be appearing on approximately 10 CTA buses.

Since the September 11 attacks in 2001, JCUA has worked alongside the Muslim community to build bridges between the two communities, and create partnerships that advance social justice. 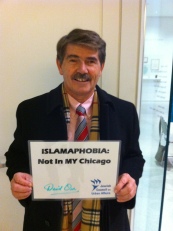 Asaf Bar-Tura directs JCUA’s Jewish-Muslim Community Building Initiative. “We do not believe in simply reacting to extremists like Geller. We take a proactive approach that strengthens Chicago’s social fabric,” says Bar-Tura. “We will not stand silently when a smear campaign against our Muslim friends and neighbors appears on our city’s buses.”

ACT NOW: Upload your own photo

All Chicagoans should speak out against the vile anti-Muslim ads! Submit a photo of yourself (upload here) holding a sign explaining why you condemn Pamela Geller’s Islamophobic CTA ads and stand in solidarity with the Muslim community.

This entry was posted on Wednesday, November 14th, 2012 at 1:50 pm and is filed under Action Alert, Jewish-Muslim Community Building Initiative, Jewish-Muslim Relations, Uncategorized. You can follow any responses to this entry through the RSS 2.0 feed. Responses are currently closed, but you can trackback from your own site.