Or Tzedek’s first two-week overnight session was a huge success. The Advanced Activism program, which was double the length of previous sessions, had sixteen teen participants and five staff members.

Working in partnership with more than 14 Chicago-based social justice organizations, this summer’s Or Tzedek teens registered more than 130 voters, took part in an action to stop deportations and created “know your rights” videos. They canvassed for housing justice and raising the minimum wage.

Click on any photo below to read much more about the 2014 program.

Or Tzedek interns at ONE Northside register over 100 new voters in the Uptown community.

Jewish, Muslim, and Catholic teens from Or Tzedek, Universal School and CTU’s Peacebuilders Initiative came together to discuss how their different faith traditions advocate for immigration justice.

Rena, Rose, Emily, Emily, and Ethan worked with Antonio Gutierrez, a housing organizer at Centro Autonomo Albany Park on their “Housing is a Human Right” campaign. Centro Autonomo taught them about root causes of foreclosures and the traumatic effect it has on community resources.

Ellory registers a new voter in Uptown as part of her four day internship with ONE Northside. Or Tzedek participants worked on ONE Northside’s campaign to mobilize new and unlikely voters to vote for increasing the minimum wage to $10. 65/hr.

Growing Home welcomed Or Tzedek to their farm, teaching the teens how to pick and plant vegetables and work towards sustainable solutions for Englewood’s food desert.

Or Tzedek canvassed with Raise Illinois, an advocacy campaign dedicated to raising awareness and fostering political activism to lift wages for low-income workers and families. Rena and Emily ask a voter to sign a pledge form, reminding her to vote on November 4. 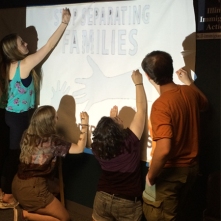 Emily, Ellory, Noah and Emily create a banner for an upcoming “Stop Deportations” rally as part of their project with the Illinois Coalition for Immigrant and Refugee Rights. 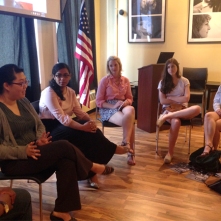 At CAIR-Chicago, Or Tzedek participants made presentations about voting and religious rights., together with CAIR-Chicago interns. 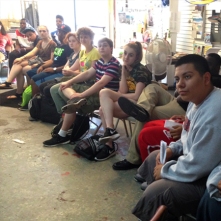 Youth from Or Tzedek and Imagine Englewood If… learn about the school to prison pipeline from Voices of Youth In Chicago Education (VOYCE).

Diane Latiker, founder and director of Kids Off the Block, shows KOB’s Roseland memorial to the young people who have been killed by gun violence in the community.

Rose calls for President Obama and ICE Chicago director Ricardo Wong to stop separating families through deportations at an action in front of Immigration and Customs Enforcement’s Chicago headquarters. Photo by Shanti Polara.

Emily, Meirav, Joel, and David, Or Tzedek alums from Advanced Activism 2013, lead a workshop on taking Or Tzedek home.

This entry was posted on Tuesday, July 8th, 2014 at 11:05 am and is filed under Or Tzedek / Teen Program. You can follow any responses to this entry through the RSS 2.0 feed. Responses are currently closed, but you can trackback from your own site.