On August 18th, 2010, community youth leader Damian Turner was shot less than four blocks from one of the best hospitals in the world, the University of Chicago Medical Center.  Damian died en route to the nearest trauma center, more than 9 miles away at Northwestern Memorial Hospital. Damian’s death highlighted the south side’s vulnerability to gun violence because of a lack of emergency medical care. South Side organizations began a campaign for a Level I trauma center at the University of Chicago. 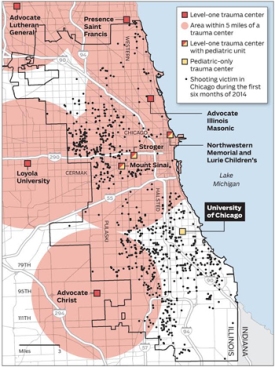 Jewish teachings forbid us from standing over the blood of our neighbors, and command us to do everything necessary to save a life. As temperatures rise for the summer, so will gun violence fatalities. Now is the time to take action. We must prioritize saving lives and ending the trauma center desert on the south side.

Having recently received the nomination to host the Barack Obama Presidential Library, the University of Chicago has an even greater responsibility to also host a trauma center. This weekend, Father Michael Pfleger wrote in the Chicago Tribune, “Wouldn’t it be both hypocritical and shameful to bring the library of President Barack Obama, who championed and fought for national health care (a part of his presidential legacy), to a university that fails to provide emergency care to those most in need on the South Side of Chicago?”

We are not waiting one minute longer. Join us in action.

Thursday, June 4th at 6:30 pm: Interfaith Vigil for a Trauma Center at 58th and Maryland

Saturday, June 6th at 10:15 am: Action near the University campus quad

Use these hashtags to tag your social media posts:

This entry was posted on Tuesday, June 2nd, 2015 at 10:21 am and is filed under Community Events, Community Issues, Gun Violence Prevention, JCUA Project and Campaign Endorsements, JCUA Statements, Jewish Community, Membership, Trauma Center Campaign, Violence. You can follow any responses to this entry through the RSS 2.0 feed. Responses are currently closed, but you can trackback from your own site.