On January 27, JCUA traveled to Springfield with the Responsible Budget Coalition (RBC) to protest the continuing budget impasse during Governor Bruce Rauner’s State of the State address. The night before, my AVODAH bayit had a program called “Jews and the Civil Rights Movement.” We had the opportunity to speak with Marv Hoffman and Rosellen Brown, who moved to Mississippi near the end of Freedom Summer to teach at Tougaloo College, an Historically Black College founded in 1869. Their time there continues to inform their dedication to racial justice work today.

During the program, they posed a challenging question to us: Do you plan to be a revolutionary? Practically, becoming a revolutionary had not been part of my game plan (I’ve seen Les Mis too many times), but the budding idealist in me wanted to respond yes. After letting us sit with the question for a moment, Marv and Rosellen told us that despite working for years in Mississippi at the height of the civil rights movement, and despite participating in radical educational and literary circles up through today, they do not consider themselves revolutionaries, or even particularly radical. For them, being a revolutionary means blurring lines between your work life and your personal life, means putting your personal safety on the line consistently, means ignoring the potential harm to those around you for what you deem to be the common good. We shouldn’t all be revolutionaries, but we all have a role to play in the fight, and we must be thoughtful and intentional about what that role is. They encouraged us to critically consider how we are living out and acting on our values every day right now, and how we will choose to fight for justice, in

our work this year and in our lives moving forward.

Their words bounced around in my head as we made the three and a half hour journey down to Springfield in the wee hours of Wednesday morning. This was my first trip to Springfield. I had spent the past two months recruiting and planning in preparation for this day, yet I really didn’t know what to expect. Would there be a lot of people? Would everything go as planned? Would it feel like “enough”? That last question had gained additional weight for me since the previous night’s program, especially considering that seven of my housemates decided to take a day off of work to join us on this journey. Would they feel as though their participation was valuable?

We arrived at the Capitol moments before the RBC’s rally was set to commence. My van load of folks walked into the rotunda and joined up with the rest of JCUA’s 27-member delegation. In that moment, I was overwhelmed by the sight of so many people, standing together, holding up signs and wearing “Choose Revenue” stickers, waiting for the rally to begin. The energy was palpable, and it only increased as the day progressed. After the formal rally in the rotunda, we migrated to the third floor outside of the chamber where the State of the State was held and rallied again – chanting, yelling, and singing for almost the entire speech. Every few minutes a different member of the crowd would start a chant which we would all take up, the sound amplifying as the words were picked up around the circle.

At one point, after we had been asked by the security guards to stop yelling or singing, a few people began humming “We Shall Overcome,” and quickly the entire crowd, hundreds of people, picked up the song. It was beautiful, it was clear, and, in it’s softness, it was strong.

For obvious reasons, I and several of my fellow Avodahniks were reminded in that moment of our program the night before.  While most of us were present as allies, many of the people around the Rail that day were there fighting for their own health, livelihood, home, children – the list goes on. I am not saying that the fight for a just budget in Illinois today is the same as Mississippi’s Civil Rights movement. I am saying that today, over 50 years after Freedom Summer, people are still fighting to overcome, still tirelessly pushing to feel as though their lives are valued by the society they live in. They are still singing “someday,” and hoping that that day is today. For me, that is a powerful and agitational reality.

While we didn’t get a budget passed that day, while we didn’t reform our regressive tax system or bring a divided legislature to compromise, we did come together as a community with shared values to call for a system that takes into consideration every member of our society’s basic needs. These considerations don’t sound particularly revolutionary, and yet.

I live in a house with 14 radical, passionate individuals. They push me, they inspire me, they question me, they help me not settle for anything less than putting my full energy and intention into everything we do together (except maybe watching TV). I work for JCUA, an organization that is staffed by driven, focused, and energized people, who push themselves and galvanize our community to grow, think, and act together and with diverse communities across the city for a better Chicago. And I get to work with our incredible member base, full of people who have dedicated their time and their lives, in myriad ways, to the fight for justice. I am inspired every day.

Will I leave this year on a revolutionary path? I can’t say. But, moving forward, I, like Marv and Rosellen, can remind myself daily to hold my values at the forefront of every decision I make and action I take. And one day, may we all be able to look back on many years of committed action towards justice, proud of the work we have accomplished and hopeful for the future work that remains to be done. 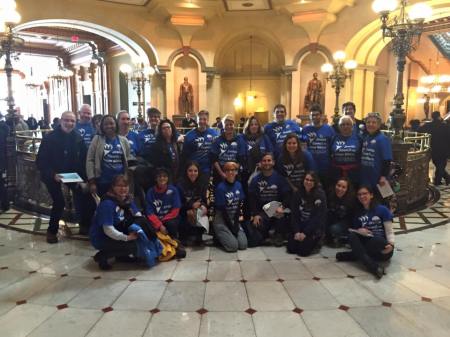 Want to get involved with JCUA? Click here to join us!

This entry was posted on Wednesday, February 10th, 2016 at 11:58 am and is filed under About JCUA, Budget Reform, Civic Engagement, Community Events, Community Issues, Economic Justice, Government Accountability, Guest Blog Posts, Human Rights, Interns and internships, JCUA Project and Campaign Endorsements, JCUA Statements, Jewish Community, Membership, Racism. You can follow any responses to this entry through the RSS 2.0 feed. Responses are currently closed, but you can trackback from your own site.